The eighth volume of the 5-toubun no Hanayome series.

After managing to win a pair of lottery tickets to a hot spring resort, the Uesugi Family meets up with the Nakano Family. During the trip, Fuutarou discovers that one of the Quintuplets wants to end their relationship with him. Fuutarou then tries to discover the identity of this Quintuplet, and the mystery behind the sisters dressing up as Itsuki.

The Quintuplets Can't Divide the Bed by Five 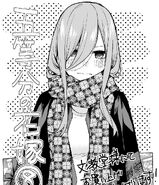 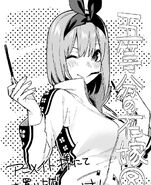