[Digital] February 5, 2019
The sixth volume of the 5Toubun no Hanayome series.

Despite the upcoming exam, Nino still has trouble following Fuutarou's study session, even trying to avoid it. One day, Nino lashes out and gets into a huge fight with her sisters, resulting in both her and Itsuki leaving the apartment. Then, there's Yotsuba, who is still shackled by the school's track team.

The volume cover features Itsuki Nakano in her student uniform, with reddish-orange colored flower petals scattered in the background.

Fuutarou-kun Can Divide A Cake Into Fifths Evenly 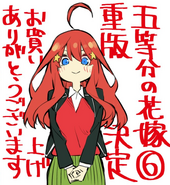 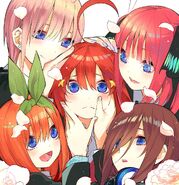 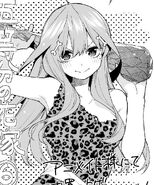 Vol. 6 Itsuki Bonus
(安利美特)
Add a photo to this gallery