The fifth volume of the 5-toubun no Hanayome series.

Fuutarou is hospitalized. When the sisters visit him, they find his condition is getting better. Itsuki is curious about why Fuutarou studies so hard, so he tells her a story about a young girl from 5 years ago. Strangely enough, Itsuki owns an item similar to the one in the story, which she obtained from the same place and time frame.

The volume cover features Yotsuba Nakano in her student uniform, with light-green colored flower petals scattered in the background. 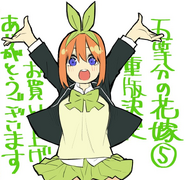 Author Bonus Illustration
Add a photo to this gallery 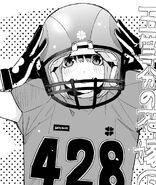