The fourth volume of the 5Toubun no Hanayome series.

Fuutarou and the Nakano Quintuplets go on a camping trip, about which there is a notorious legend involving the bonfire dance. Fuutarou, who is chosen to be part of the committee for the Test of Courage, doesn't take the legend seriously; on the other hand, the Nakano sisters believe the legend and some of them have a fight about who gets to be Fuutarou's dance partner.

The volume cover features Miku Nakano in her student uniform, with light-blue colored flower petals scattered in the background. 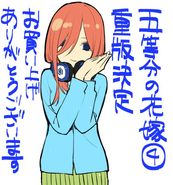 Color Spread
Add a photo to this gallery 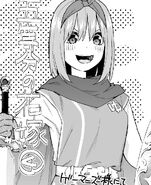