The third volume of the 5-toubun no Hanayome series.
The English subtitle for Volume 3 is "Cram Session."[3]

We’re back again with Futaro and the Quintuplets in volume 3! Midterms are just around the corner! Can Futaro get the Quints to study enough for their tests?! The trust between them deepens after the fireworks festival, but Futaro’s future is on the cutting block?! What does their father have to say about their progress…?

Fuutarou’s tutoring job is not going well. Nino and Itsuki are still unwilling to join the study session, and the midterm exam is coming soon. Papa Nakano decides to test Fuutarou's qualification as a tutor. If the quintuplets get a failing grade, Fuutarou has to stop being their private tutor.

The volume cover features Nino Nakano in her student uniform, with dark purple-colored flower petals scattered in the background. 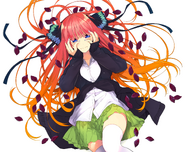 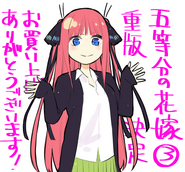