The trick to quintuplets

The trick to quintuplets (Polish: Sposób na pięcioraczki) is the Polish name/title for 5-toubun no Hanayome manga published by Studio JG in Poland. Each physical copy of the book costs 22,90 zł as stated on the cover. The series was a part of the publisher's 2020 Autumn Manga Festival.

Every pre-order comes with with two new cards for a memory matching game.[3]

For pre-ordering at least the first volume of at least three of the series featured in the festival, fans could get a limited edition art card signed by original author Negi Haruba.[4]

Difference(s) Between the Japanese and Polish Volume

There is no significant difference between the Japanese and Polish version, except the naming of characters and places. 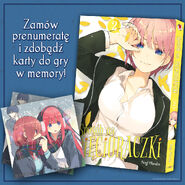 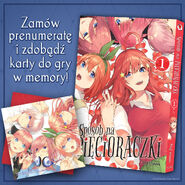 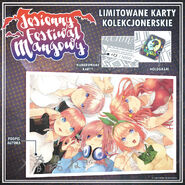