The Nakano Quintuplets have an average height (B88-W50-H159), pinkish red/light red hair color, large, dark-blue eyes [29], a well-endowed figure and large breasts where Maruo Nakano confirms that the Nakano Quintuplets are "identical quintuplets".[30] Miku Nakano states that their physical measurements are the same [31] and Ichika Nakano also confirms that she and Yotsuba Nakano have the same figure.[32] Due to their similarities, they can easily impersonate each other to accomplish various purposes.[33] They can also easily search for the other by asking around.[34]

In the past, the Nakano Quintuplets have very similar looks.[35]

The Nakano Quintuplets are noted to have beautiful looks, in which Shimoda makes a comments that Itsuki Nakano must be a popular girl.[38] Itsuki herself labels the Nakano Quintuplets as vivacious girls.[39] Ichika also boasts that the sisters are gorgeous.[40] Their classmates praise them as a cutie/beauty[41][42] and even a random stall owner is impressed by their looks.[43] These features may be derived from Rena Nakano (the Quintuplets' mother) who is acknowledged as an incredibly beautiful woman.[44]

While they're physically the same, each sister have different hairstyles/hair length and accessories.[45] Due to artistic purpose and better differentiation, the sisters have various shades of red hair color in the manga and anime adaptation (In-universe, their hair color is the same):

Itsuki, Nino and Ichika wear a handbag, Yotsuba wears a sports bag and Miku wears a ranzel.[46][47] The sisters usually spends more than twenty thousand yen for their clothes.[48] Yotsuba is shown to wear an animal-themed pajamas [49] while Ichika is shown wearing night gown.[50] All of the Nakano Quintuplets have the same phone model.

The Nakano Quintuplets follow the "Gotoubun Principles", a philosophy taught by Rena Nakano (the Quintuplets's mother).[51] They consider themselves to be five parts of one whole and have to share any kind of emotion together, such as anger, joy and love.[52] Their belief of this philosophy is shown several times throughout the series, such as going to the fireworks festival together,[53] wait for the others before celebrating something,[54] and even chose to switch schools to stay together.[55] The sisters are even willing to give up their luxurious lifestyle and high-class apartment for Fuutarou Uesugi, believing that they will be fine with anything "as long as the five of them are together".[56]

In the past, the Nakano Quintuplets have very similar behavior.[57] However, due to their mother's death, they started to change.[58] Nino Nakano commented that the changes made the sisters grew apart from one another.[59]

Each Nakano Quintuplets has their own characteristics in dealing with the exams and sheets of paper:[65]

The Nakano Quintuplets' similarities occur in many aspects, for example, they all dislike studying [71] and often make a mess during their sleep.[72][73] Nino and Itsuki are afraid of needles.[74][75] They can also be referred to as tsunderes. Both Nino and Itsuki do yoga in the morning.[76] Another similar trait would be Nino and Yotsuba both having an outgoing personality and therefore making a lot of friends.[77]

The Nakano Quintuplets' differences in personality are reflected clearly in Nino and Miku. They often fight with each other,[78][79] and are seen as rivals throughout the story.[80] Nino is boisterous and abrasive, while Miku is quiet and soft-spoken.

Another extreme example can be taken from Miku and Yotsuba. Miku is a rather reserved and introverted, while Yotsuba has extroverted personality. Miku is the smartest out of the quintuplets,[81] while the latter is the least intelligent.[82] However, the former is also the least athletic[83] while the latter's athleticism is the highest.[84]

Ichika is a lazy doing household chores,[85] while Nino is hardworking when it comes to minding the house and cooking for her sisters.[86] When it comes to love confessions, Ichika uses an indirect means to confess[87] while Nino prefers going at it directly and clearly.[88] Miku indirectly note that these various traits and personalities are what makes the quintuplets complete.

Ichika Nakano labels the Nakano Quintuplets as "idiots".[89] Their academic abilities are very low, and they almost fail their First Year of high school.[90] They also generally have low capability of learning.[91] Each one of the sisters has different subjects they excel, but even the grades of those subjects are still mediocre.[92] Despite being slow learners and having various personal setbacks, they managed to pass the Second Year Final Exams, an improvement from last year's.[93]

Miku Nakano states that whatever feat she can achieve, the other four must be able to do it, too, since they're Quintuplets.[94][95] Because of this, Fuutarou Uesugi believes that the Nakano Quintuplets have the potential to get higher academic scores.[96][97] Miku's statement implies that the sisters have the same potential, and despite their current abilities, they can be as good as the others (for example Miku can be as good as Nino Nakano in cooking or become as athletic as Yotsuba Nakano) if they're willing to train. This is later proven when Miku is able to produce a good bread after weeks of training.[98]

Nino states that as quintuplets, they aren't capable of telepathy.[99] However, they are shown to have a similar train of thought in several occasions.[100][101] 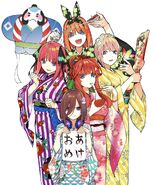 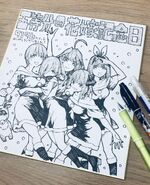