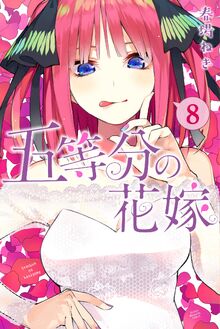 The cover of volume 2 until 6 feature one Nakano Quintuplets in their personalized student uniform with a colored flower petals unique to each one of them in the background.

The cover for volume 7 until 11 feature one Nakano Quintuplets in western style wedding dress.

Each volume has an illustration of a flower bouquet with the series' romanized title (stylized as "5toubun no hanayome" in the Japanese volume, "the quintessential quintuplets" in the english version), author name, and volume number inside it.

The filler page has a picture of a diamond ring with the word "5toubun no hanayome" (Japanese volume) or "the quintessential quintuplets" (English volume) in the middle.

A short comic near the end of each volume, featuring the Nakano Quintuplets and other character's daily life.

A page that contains various cutscenes from the upcoming volume, author notes, editor commentary, and any announcements related to the series.

The series reached one million prints mark after 1 year and 2 months of publications[1].

In November 2018, there are 7 Japanese volumes published with 1.3 million print counts[2].

Around mid January 2019, Negi Haruba tweeted having 2 million prints for 7 volumes.[3] The total sales around early February 2019 is more than 1.6 million. This is most likely due to the sales boost from the anime adaptation.

For the week of 27 January - 3 February, all seven of 5Toubun no Hanayome volumes sell in the Top 50 of weekly ranking.