Fuutarou was born on April 15, seventeen years before the start of the story. From childhood to teenage years, Fuutarou lives with Isanari Uesugi (Fuutarou's father) and Raiha Uesugi (Fuutarou's younger sister) as his mother passed away when he was six.

Fuutarou is a handsome fair-skinned young man with bluish-black hair that is styled in a bowl cut with two strands sticking up from the back of his head (Nino Nakano comments that he has a weird hairstyle, in which Fuutarou claims that it was cut by Raiha Uesugi)​[3]​, blue eyes (black eyes in the manga), a standard slim male physique and a tall build (Despite being tall, he slouches occasionally). 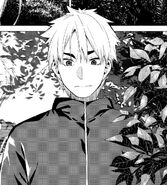 According to Isanari Uesugi, Fuutarou used to be similar to his father as a kid with their wild personality and being bad at studying who lives a frugal lifestyle[6] and prefers solitude.[7] Someone comments that Fuutarou is always like that, trying to not associate with everyone.[8] Ichika Nakano remarks that Fuutarou is direct and doesn't mince words.[9] Yotsuba Nakano's first impression of Fuutarou is a gloomy and not-having-many-friends guy.[10] His facial expression is always serious, sometimes having a grumpy and annoyed look, and rarely blushes or gets flustered.[11][12] Fuutarou thinks that being the Class Representative is just hindering his study.[13]

Fuutarou is noted to have a big ego and high confidence.[14][15] He can also be rude and straightforward, but is actually capable of holding back his emotions.[16][17] Despite that, Fuutarou could momentarily lose his composure when agitated and faced with unfavorable circumstances.[18] He also doesn't like getting involved with other people's problems, finding them to be troublesome.[19]

Fuutarou is shown to be hardworking and has a high patience, as he is able to tutor several girls that have below average scores. It is personally stated and hinted that Fuutarou currently doesn't have interest in romantic relationships.[20] He considers love as something foolish and detests it.[21]

Raiha Uesugi describes Fuutarou as "an overly confident" guy and a "study freak."[15][22]

Nino Nakano encourages Fuutarou about his future love life, despite labeling him as a tactless guy.[23] Ichika also said the same thing when she visits him in the hospital.

Fuutarou has a habit of covering his mouth with his left hand whenever he feels embarrassed.[24]

The older Fuutarou is someone who does not pay attention to anything except study.[25] The test sheet is written specifically for each sister.[26] Fuutarou then tells them that they don't need to pay him now, and that they could do so in the future.[27] Fuutarou worked on various food-related part-time job. Itsuki suspects that it was for the free food.[28] Miku Nakano finds Fuutarou which is thinking about love-related stuff funny.

Fuutarou is a smart student and ranked top among his peers. He acknowledges that his forte lies solely in studying.[29] He is able to score perfectly in various tests.[30] He got 100 in all 5 subjects during the Second Year Midterm Exam.[31] He also has an exceptional memory and excellent reading comprehension.[32] Fuutarou is able to absorb several dozens worth of books in three days.[33] His reason for studying is related to a young girl in his flashback.[34] Fuutarou is able to sleep while sitting straight with his eyes wide open.[35] Ichika Nakano's director notes that Fuutarou is the one who draws out Ichika's potential.[36] Fuutarou is shown to have a cunning and crafty mind, as he's able to get the most out of the cafe's menu, successfully trick a teacher with his plan, and getting the lazy Nakano Quintuplets to start studying.[37][38]

Fuutarou acknowledges that human relations isn't his strong point.[39] He always tries to cut off relationships with others aside from family, that is why he doesn't have experience with confessions.[40] He is less adept with technology - he is unfamiliar with the internet's function[41] and that he is unfamiliar with Nakano Quintuplets' apartment lock system.[42]

Despite his poor social skills, he is able to see through a person's emotion and motivate them.[46][47] Initially, Fuutarou is unable to judge the names of the sisters since they're so similar, but later he is able to differ them by how they call him.[48][49] He is also capable of distinguishing the girls' based on their individual style of writing. Fuutarou is in a slump for quite some time, as he is affected by Nino's confession.[50]

Fuutarou is not good at cooking.[51] He is able to ride a motorcycle.[52] He once worked on a delivery job before, which was when he got his license.[52]