"Five Cranes in Return" (五羽鶴の恩返し, Gowazuru no Ongaeshi?) is the tenth episode of the second season of the 5-toubun no Hanayome anime series. It is the twenty-second episode overall.

Futaro is approached by fellow classmate Takeda Yusuke, who reveals that Futaro’s class ranking slipped during the finals from Futaro tutoring the quintuplets. Takeda suggests that Futaro quit tutoring, but Futaro defends his choice, declaring that he'll make sure the sisters pass and that he'll make it into the Top 10 of the upcoming national mock exams. Ichika reveals her feelings for Futaro to Nino, and they resolve to compete for his love. The sisters decide to postpone Futaro's birthday gift-giving until exams are over, as to not to distract him. On Futaro’s birthday, Itsuki tells him she's begun interning at a cram school. After the exam, Futaro surpasses Takeda, placing 3rd nationally, earning his admiration. The girls present their gifts to Futaro. Miku tells Yotsuba that she wants to prepare a lunch for Futaro on their upcoming school trip. Yotsuba tries to help set them up together, but Ichika interferes. Raiha tells Futaro to get Yotsuba a thank you gift for her help during the school camp. After looking at things her sisters like at the mall, Futaro asks Yotsuba what she wants. They go to a park that Yotsuba frequents and have fun talking on the swings. While cleaning at home, Ichika discovers the picture of Futaro and "Rena", finally realizing that “Rena” indeed is one of the sisters. Yotsuba, despite not physically receiving anything from Futaro, explains to him that she already got what she wanted, which was to spend time with him and see him smile. 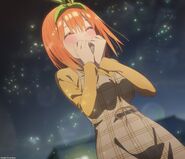