"Today and Kyoto's Tough Luck and Togetherness" (今日と京都の凶と共, Kyō to Kyōto no Kyō to Kyō?) is the first episode of the second season of the 5-toubun no Hanayome anime series. It is the thirteenth episode overall.

Futaro ends in the hospital because of the cold he got during the school camp. The doctor visiting him triggers some memories of the girl Futaro met during his school trip to Kyoto six years before. The quintuplets all pay him a visit, and Itsuki brings him a good luck charm identical to the one the girl from his memories had bought in Kyoto. After being released from the hospital, Futaro goes to the quintuplets' apartment, running into one of them fresh off the shower. Unable to recognize her, as well as the zero-points tests she threw at him in the heat of the moment, Futaro challenges himself to recognize the five sisters with identical hairstyles, failing spectacularly. Itsuki wonders if Futaro is trying to find out the identity of the girl from his past, but he dismisses the idea of her being one of the quintuplets as the girl wouldn't have grown into such a poor student after promising to study hard. 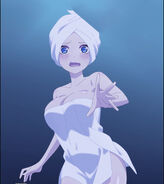 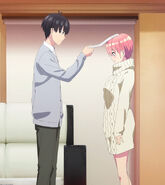