That's right, it was Yotsuba who was bringing Itsuki a change of clothes and ... more ... Maybe this will be covered in the next movie, OAV or third season, or maybe not, we'll find out in the future!

I read the manga and I already know the end, but I remember how funny it was at the time to make these assumptions, so I could play a little and answer you that your theory makes a lot of sense...But if you watch episode 7 of the second season, when Itsuki and Fuutaro play the echo right where there is the bell, Itsuki arrives before her sisters and Yotsuba congratulates Itsuki saying that she runs very fast...

Yes, I understand you!

I went to check it myself before trusting

This is what many readers would have wanted, unfortunately, for a variety of reasons, the ending is lacking from this point of view.

There must be an effort on the readers' side to appreciate the meaning of the ending and many, even if they have understood the reasons for the choice, have not yet appreciated it.

The point I would like to emphasize is the one mentioned by KingLil-Leem, a significant reason why he liked her. The reasons given by the manga are scarce and almost contradictory. Deeper meanings can be found, but they give little color to the choice.

Apart from the now infamous issue of the rushed ending, what was missing was an understandable ending for everyone (I don't criticize who was chosen, but how she was chosen)

A reply to Shawn Roberts
1 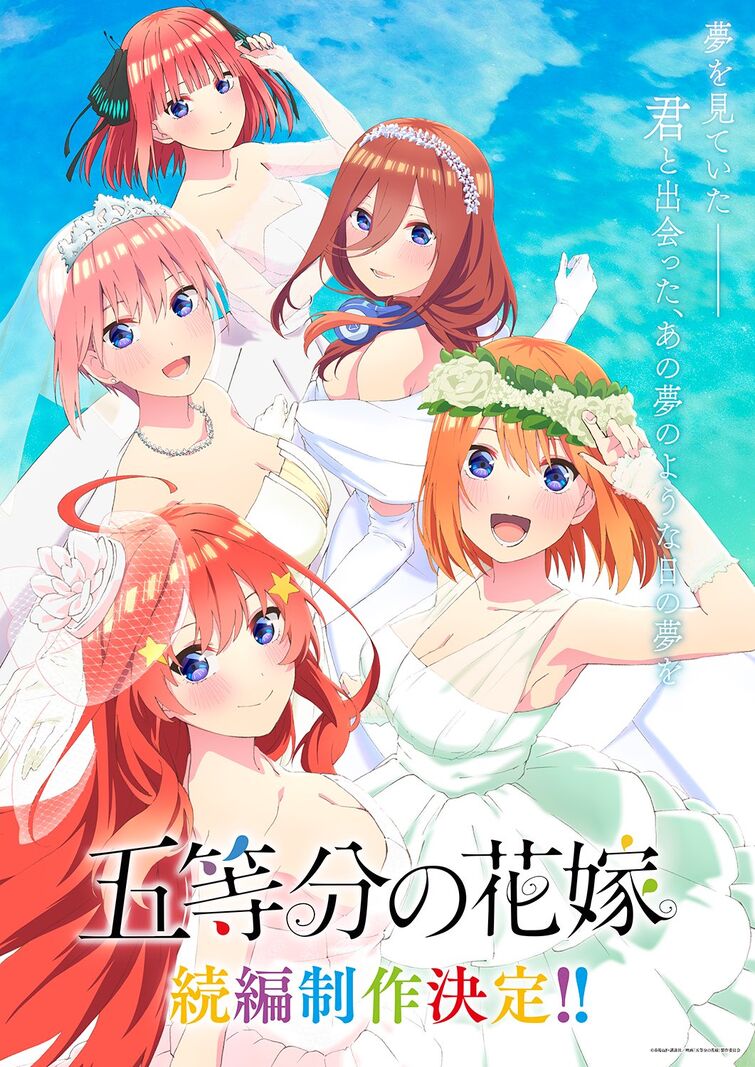 ""I hope they could make a canon ending for all brides, so that all Go toubun no Hanayome fans will be happy and there will be no disputes."

I hope the translation is correct

This is the english wiki, next time, if you can, translate, please. Thank you!

Let's see how the second season ends, but today 24/3/2021 a game with various scenarios comes out, so everyone can choose the ending they want (in a sense)

At the time many readers thought so and many even hoped it, the author had accustomed us to a continuous twist, and instead ... nothing!

When the anime was produced, the manga was not yet finished, even if the Author had already decided the ending and therefore, perhaps, some indication was given.

But the mystery on the chosen one, for obvious reasons, had to remain.

A second series is in production, there are various factions, between those hoping for a different ending and those who want the anime to be the same as the manga, we'll see!

In the manga the choice was made, and only one sister was chosen

Thanks for your suggestions!

Right now, I'm reading the manga, I like both the story and how these "difficult" themes are addressed!

If possible,I generally watch subtitled anime, I like listening to the original voices (and maybe I learn something ....)

No, it's from another author. (title is "Cuckoo no Inazuke" or "The Cuckoo's Fiancee").

I think Negi will rest for a while since he has admitted that he is quite exhausted. (and still made a lot of money with GoToubun....).

Yes, they recommended "A silent voice", I had never heard of it before and they advised me to read the manga before watching the movie.

I found out over time that there were several girls following GoToubun!

Usually I start reading randomly on the advice of friends or relatives, if I like it, then I continue. If I really like it, I devour it every minute off of the day !

If possible, I try to avoid ongoing manga , Go Toubun was the first time and made me struggle!

(Actually I'm reading the new Cuckoo manga, which has taken the place of Go Toubun. It's more out of habit, but it's not bad for now!)

The last manga I liked were:

Hahaha! It's true! In fact, normally, I'm not interested about this genre. But this story seemed different, I discovered it by chance (my brother had described it to me as very well done) fairly soon and I became interested in the narration. There weren't too many fanservices and the plot was undoubtedly interesting. By chance I started giving a little help here in Wikia and in the end I remained stucked to this until the very end! If I have to tell the truth, towards the end I started to wonder if I should drop it. I was probably more interested in the slices of life in the first half, than in the following little drama. But in the end I, as everyone else I think, was curious to know who the bride would be. In the end, unfortunately, the story was disappointing. Both for choice, the character of Yotsuba should have been deepened much more to make her an appreciated choice. And also about how the choice was made, that could and should be told much better.

Despite that, in the end, I liked all the experience here in Wikia and all the people I met here, so I definitely don't think I wasted my time!

> what do you mean "female target"

I'm a girl and I (and other girls too) really like this manga, even if it wasn't intended for our target.

> and also how "was not the best to describe the feelings in the manga"?

I'm sorry, I don't get it! Are you talking about something I wrote?

Although my favorite was Nino, I'm quite shocked about the treatment of Itsuki's character. Hiding feelings was bad for Yotsuba (and we agree) and is it good for Itsuki ??? WTF? These kinds of teachings in a manga aren't exactly the best!

As for Yotsuba. Negi wanted to amaze. He wanted a Genki girl from the past to win. Okay, it's his manga, he does what he wants. But if he wanted to make a GOOD ending to an EXCELLENT manga, he also had to explain better how the choices were made. Why did Fuutarou choose Yotsuba? What were his thoughts? Sure, there are little hints in the manga, but they are difficult to find, even with a microscope. Of course, I also found some of them, but some were direct author's suggestions for the reader, not Fuutarou's thoughts. I don't think that's the right way to write a good ending. In the end there must be a clear explanation, even for the most absent-minded reader. This manga was my favorite to say the least, despite not being for a female target. The ending left me flabbergasted, considering the rest of the story, I honestly expected much more. I expected Fuutarou's reasoning, why he had fallen in love with that sister, Yotsuba in this case. I expected, yes, a certain bitterness between sisters and in this I was satisfied. But to see Itsuki bury her feelings under a smile, Nino and Miku still in love after 5 years and Yotsuba become a kind of vegetable dependent on the choice of Fuutarou. Really disappointing!

In chapters 117 and 118 it was seen that Itsuki had some problems with herself and did not feel fully capable of congratulating Yotsuba and Fuutarou. After the various events during the two chapters, Itsuki realizes that she too has fallen for Fuutarou, but that there is no more room for her feelings now that Fuutarou has declared himself. So Itsuki decides to keep her feelings towards Fuutarou secret, trying to see them as a precious memory (Itsuki memoires, as the title of the chapter) of this period of her life.

This is a really good question. I personally think it is extremely unfair for Itsuki not to give her even a chance. I'm waiting to see if this author's choice will be mentioned in Itsuki's character book.

The manga was written in such a way that the answer, for the other quints, remains to the reader. Therefore, imagine the future best suited to you!