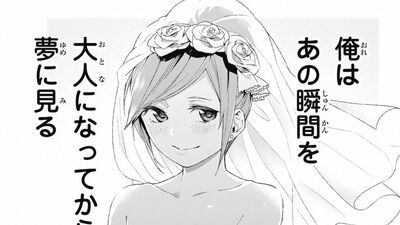 The Bride refers to a sister of the Nakano quintuplets who married Fuutarou Uesugi in the Timeskip. The bride was revealed to be: Throughout the series, Negi Haruba provide various hints regarding the bride's identity: The Bride is one of the Nakano Quintuplets. The Bride has ear piercings in...

I'm sorry for the very long text, but I think there are a lot of people deluding themselves about the anime having a different ending than the manga. I will present some points that can tell us who Fuutarou will choose in the anime (it will be about the kiss scene, because this is what will decide who Fuutarou will choose, since, as he said: "I started to see her with other eyes since that day ").

-Nino has so much courage that she wouldn't hide dressed up as Itsuki, doesn't she want Fuutarou to pay attention to her ?;

-It'suki wouldn't have the courage;

-She knows that Yotsuba also likes Fuutarou, an example of this is in a moment of episode 10 when Fuutarou's sister says that "Rena" was his first love, Yotsuba puts her hands on her chest and looks sad , and Itsuki sees this and looks sad too;

-Ichika knows he can't tell them apart, so Fuutarou might think that whoever kissed him could be Itsuki or anyone else, that would be kind of putting someone in their own way, she wouldn't do that, she already has Miku and Nino on her way; It has been shown that Ichika has weakness in romantic moments, is always flushed and embarrassed when she thinks about it (this is also written on the GNH Wiki), the girl in the bell scene doesn't seem to be ashamed at all;

-Miku is a girl of pessimistic thinking and low confidence;

-She already had her moment in the episode, when Fuutarou gets to know who she is, and then she says this: "Fuutarou is a teacher / I am your student / That doesn't change";

-I think she wouldn't run fast like that, she's the weakest physically out of the five. Also, moments before that scene, there is that scene where she is dressed up as Itsuki and Fuutarou manages to know it's her, and she runs up to him. The girl in the kiss scene runs faster than that; -Fuutarou can identify her now, so he would know that it was she who kissed him, and if she had kissed him, why would she be embarrassed and hide from him as in episodes 11 and 12 because she knew that Yotsuba spoke by accident that she likes him? And it couldn't be because of the sisters, they all know that she likes him;

-She kisses him in the manga is her, and if we look at the manga page where it happens (chapter 68) they are identical (the way she tries to kiss him, the face they make ...); -The girl who kissed him had to move away from the other sisters to look for him and then she ran up to him to kiss him, and it seems that when she reaches Fuutarou she doesn't even look tired. There is only one sister who can do it: Yotsuba, we all know that the best thing she does is run;

CONCLUSION: NINO AND ICHIKA WOULD NOT HIDE ITSUKI DRESSES, YOTSUBA YES. MIKU AND ITSUKI WOULD NOT HAVE COURAGE, THEN WE CAN DISCARD THEM.

At the end of episode 12, the bride's hair is shown twice, and the hair looks more like Yotsuba's hair (which we see in the anime, not least because they all have the same hair color (their real hair color is shown for a brief moment in episode 4)).

CONCLUSION: FOLLOWING THIS, YOTSUBA WILL BE THE CHOICE.

THE SIGH OF "ITSUKI"

In the kiss scene, the girl who kisses Fuutarou lets out a sigh. I looked at this scene several times and I looked at scenes like these with all the sisters, if I had to choose a sister that I think most likely would not do that kind of sigh is Miku. I think she would make a sigh more "low", more "prolonged", and more in keeping with the "dead" voice she has.

CONCLUSION: IF WE ANALYZE THIS, THE MOST LIKELY NOT TO HAVE KISSED FUUTAROU IS MIKU.

FOLLOWING ALL THAT, THE MOST LIKELY BEFORE THE SECOND SEASON STARTING WERE YOTSUBA (BECAUSE OF THE MANGÁ) AND MIKU (BECAUSE IT IS THE MOST POPULAR), BUT AFTER ALL OF THAT, IT IS MORE EVIDENT THAT MIKU WILL NOT BE CHOSEN.

I have no idea who the bride is. Has it been Officially confirmed that its Yotsuba? Or Miku? Or Ichika? Or Itsuki? Or Nino? I DON'T UNDERSTANDDDDD

I don't know if this discussion forum is read or not, but I try anyway. At this point in the manga (chapter 117) with a handful of chapters left, would you like a change of the bride? It seems clear that Yotsuba is the bride, (at least from volume 14 cover...) but I wonder if we can still reasonably think of another ending.

(edited by administrators)
The BrideNino Nakano 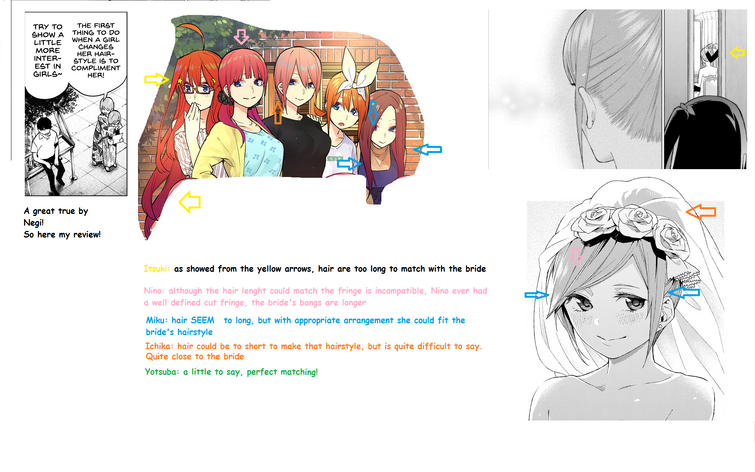